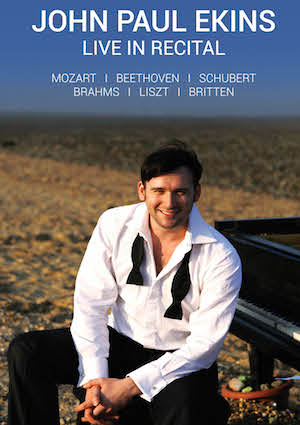 John Paul Ekins’ scintillating, communicative and sensitive performances have drawn praise from audiences and critics alike. On his debut DVD he performs some of his favourite piano works:

“This rewarding concert, recorded live, peaks with Britten’s unjustly neglected Holiday Diary. There are some nice touches: the melody shared by the thumbs is clearly visible thanks to the camera angle, and even the virtuoso ‘Funfair’ is eclipsed by the superb performance of ‘Night.’ The Mozart Fantasy in C Minor is given an eminently musical reading; the Schubert A-flat Impromptu reveals Ekins’ wonderfully light touch; and Liszt’s ‘Cantique d’amour’ is well judged structurally. Brahms’ three Intermezzi Op. 117 are engagingly intimate. Finally, the Waldstein Sonata reveals a fine musical instinct. A pianist to watch.”

“An attractive package with much fine playing, this handsomely produced DVD presents a complete recital given by young British pianist John Paul Ekins. In an engaging, personal programme note, Ekins gives his rationale for wanting to release a DVD of live performances as his first recording, rather than a studio produced CD. The unedited playing is at a remarkably high level throughout and frequently shows the spontaneity at which Ekins is aiming, above all in an intensely Romantic performance of Liszt’s ‘Cantique d’amour’ and an affectionately characterised performance of Britten’s Holiday Diary.”

Please find below a link to purchase from Paypal. Alternatively please contact me to arrange payment via cheque or bank transfer.
Price: £15 (£16 from Paypal). This price includes UK Postage & Packaging.

CD: From the Shadow of The Great War – British Works for Cello & Piano 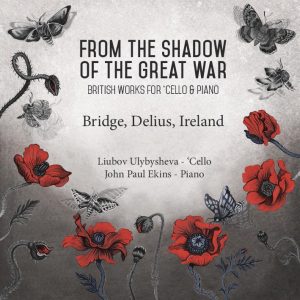 A few years ago, a request to perform the Bridge Cello Sonata resulted in the music leaving such a deep impression on us that we started to delve deeper into post-war British repertoire, becoming heavily inspired and influenced by it in the process. We wanted to link together music that had been written as a reaction to the events of 1914-18; among the many works that we found, there was one with which we felt an immediate connection: John Ireland’s Cello Sonata, written in 1923, similar to the Bridge in its brooding and ominous evocations.

Set against these two works, we added a short sonata by Delius, totally contrasting in mood. Though written in 1916, just a year after Delius fled to London from German advances in France, this piece has an incredibly dreamy, almost Debussy-like character, with none of the dark intensity found in the Bridge and Ireland. To complete our programme we chose a series of earlier short pieces by Bridge. These were written before the war and are considerably lighter in mood.

Though the overall mood of the the pieces is understandably dark, none of them is devastatingly so, and one might even argue that all three sonatas have something of a triumphant ending. Thus our message is one of hope, as 2018 sees us commemorating one hundred years since the end of The Great War, and look ahead to a peaceful future, in Great Britain and abroad.

Please find below a link to purchase from Paypal. Alternatively please contact me to arrange payment via cheque or bank transfer.
Price: £12. This price includes UK Postage & Packaging.

Buy my DVD with Paypal: